Next Rock on the Right 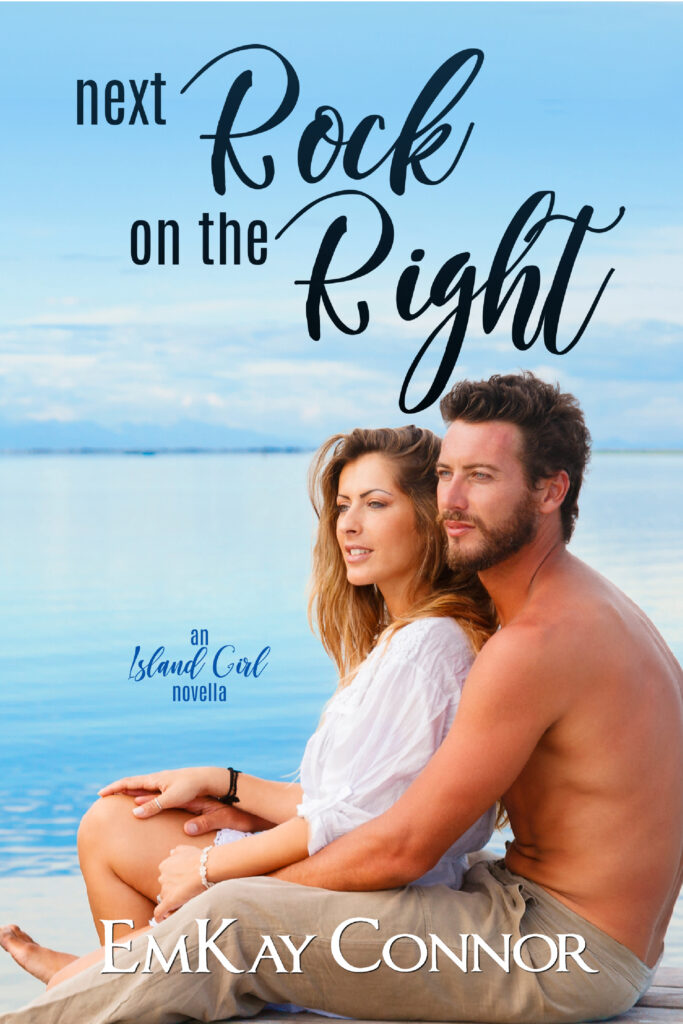 Part of the Island Girls series:

Britt Connolly’s life was Instagram-perfect…until her boyfriend fell in love with her sister. She smiled through gritted teeth at the wedding and bought a four-slice digital toaster for their housewarming, but their announcement that Britt is about to be an auntie is too much. When her boss offers her an assignment that could fast-track her career—and requires a two-week stay on a beautiful tropical island—she grabs the chance with both hands. However, her fantasies of cocktails on the beach, a no-strings vacation fling, and a decadent escape to an upscale resort crash like a pirate ship on a reef when she arrives at Isla Tortuga Verde.

Luka Stanic had dreams of mending broken bodies and healing shattered lives by becoming a physician. One year as an ER doc at Boston’s most prestigious hospital dealing with rules, regulations, and red tape led to a crisis of conscience and a leave of absence from which he never returned. Instead, after discovering the underserved population on Green Turtle Island, he rediscovered his passion for medicine. When an international nonprofit recruits him as the spokesman for an international fundraising campaign, he must confront everything that disillusioned him in the first place. It would be so much easier to tell the corporate bean counters to take a flying leap if he wasn’t so attracted to the sophisticated red-haired, blue-eyed advertising exec tasked with convincing him to say yes.

Britt symbolizes everything Luka left behind to create a meaningful life. But she’s also a reminder of what’s missing from that life. With a little luck, a lot of determination, and the white sand, blue ocean magic of a tropical island, Britt and Luka will discover the journey through life is better together than alone.

Unlike most people, I love Mondays. There’s nothing more thrilling than coming into the office early on the first day of a new week, energy replenished, creativity pulsing, the week a pristine canvas just waiting to be filled with new ideas, new campaigns, new collaborations, and new achievements.

It was barely ten a.m. on this Monday, and I wanted nothing more than to crawl under my desk. Or better yet, crawl back under my covers and turn the clock back a year.

“You have to come, Britt. We want you to be the baby’s godmother, and the godmother has to be there for the gender reveal.”

I pulled the phone away from my ear but still heard the conciliatory undertone that colored every single conversation with my sister like a filter on a camera.

A vicious jolt of satisfaction shifted to a guilty pinch. I rubbed my forearm, as if to ease the unpleasant sensation. Mona and Nick—my ex-boyfriend, who was now my brother-in-law—hadn’t meant to fall in love. It “just happened.” Yeah, that statement includes air quotes.

What “just happened” was the three of us were supposed to meet up for a ski weekend in Steamboat Springs so I could introduce Mona to my new guy. I got stuck at work and left later than planned, and then a record-breaking March blizzard dumped four feet of snow, making the roads impassable. Mona and Nick were snowed in together for three days—long enough to figure out they were “soulmates.”

It was fate. Destiny. Cupid. Kismet. Call it whatever you want. They never meant for it to happen and were so genuinely remorseful that I couldn’t remain angry, even though a tiny black corner of my heart was still vindictive. Nick and I had only been dating for a few months, so I was more disappointed than devastated. Still, it seemed we—I?—couldn’t shake an underlying sense of betrayal.

Or was it jealousy?

“I’ll do my best.” I pressed the phone against my ear. “I’m in the middle of a huge campaign right now, and I’m not sure I can get away.”

“It’s a week from Saturday. Surely, you can give us an hour.” Now her tone was a combination of remorse and reproach, heavy on the latter.

Her expectation that I should be as excited about her pregnancy as she and Nick were was like a gust of wind across a bed of coals. Red-hot resentment flared in my chest. I clenched my jaw to avoid saying something I’d later regret.

Mona had my life—my beautiful, going-according-to-plan life—and I was supposed to be happy about it.

Late at night, I scrolled through my Instagram feed, torturing myself with reminders of how perfect things had been. Photos of my girlfriends and me on vacation in Maui. The nameplate on my new office when I was promoted to junior account executive at Drummond Advertising. Sunday brunch with Mona and my parents at one of Denver’s many downtown bistros. Killing a CrossFit workout at the gym. Saturday nights on the town with Nick, my sleek red hair, green eyes, and slender frame a perfect match for his dark Italian good looks. Then there were the images of the life I dreamed of, planned for, was making happen.

Nick took a knee after two months, offering Mona a two-carat, oval-cut diamond platinum engagement ring—exactly like the one I had posted on Insta. Five months later, they got married at The Little Nell in Aspen, exchanging vows at 11,212 feet, a gorgeous autumn view of the Maroon Bells and the Rocky Mountains behind them—just like the photos on my Insta—while I stood off to one side, hoping my smile didn’t look like a grimace.

After a two-week honeymoon in Italy—okay, I didn’t have any of those photos on Insta because I wanted a honeymoon cruise—they moved into a gorgeous condo in Highlands Ranch, an upscale neighborhood outside of Denver. The gleaming tigerwood floors and metallic granite counters? Yep, straight from my Instagram pics.

Right on schedule—my schedule—Mona and Nick announced they were expecting. Aw, it was a honeymoon baby. Of course. Because Mona had my perfect life, while I had—

Yeah, that was about it. Dad was retiring after thirty-five years as a high-school math teacher, and Mom was swiping left and right on Zillow, looking for something smaller than the tri-level where they’d raised Mona and me. Even my girlfriends were a fail. Like Mona, two were recently engaged or married, and the fourth of our BFF Quad as we called ourselves in college was putting herself through med school.

I realized Mona was still on the phone, waiting for a response. “I’ll be there—”

She sucked in a relieved breath, which I felt not an ounce of apology for turning into a disappointed sigh.

“—unless something work-related comes up.”

“Don’t you have prenatal yoga on Mondays?” I didn’t give her a chance to answer. “Gotta go. Talk to you later.” I dropped my phone and threw myself back in my chair.

For some reason, my inner voice—the one that dispensed wisdom at odd moments—sounded like an old Chinese man and called me Grasshopper. Who knew watching reruns of the seventies western Kung Fu with my dad would make such an impression?

I gave my mental Master Po a flick and huffed in determination, sitting upright in the chair and scanning my desk.

Mona and Nick had taken enough of my time and emotional energy. They weren’t snatching away my Monday morning joy.

Two hours later, I’d mostly forgotten about the gender reveal party, immersing myself in creatives and ad copy for the grand opening of Bite Me, a new vegan restaurant in town. Satisfied with the presentation I’d put together for the client meeting later in the week, I stood and stretched. I grabbed my Yeti Rambler and headed for the office water dispenser for a refill.

“Hey, Britt. I need a few minutes of your time.” Seymour Drummond, the ad agency founder and big boss, called out to me as I passed his office.

Seymour was somewhere between sixty and a hundred and believed in reincarnation. If I shared his belief, which I did not, I’d say he’s done stints as a hippie, a mule, and Julius Caesar. Most of the time he was chill, managing the agency with the most expansive open-door policy I’d ever experienced. When he dug in his heels on something, though, it would be easier to move a mountain than shift his stance. Like Caesar, he was strategic, political, and there were probably a few people planning his assassination. Somehow, the combination of laidback and determined worked because Drummond was one of the top ad agencies in the country.

I counted myself lucky to be learning the business under his tutelage.

“What’s up?” I leaned against the doorframe, the water bottle dangling from one hand.

“Sit down.” He poked a finger toward a chair across his desk.

It wasn’t unusual to be called into Seymour’s office, but something in his voice made the skin on my nape prickle.

In a good way.

I dropped into the seat and set the water bottle on the floor, meeting his gaze and waiting for him to continue.

“We’ve been approached by a new client.”

He smoothed a hand mottled with age spots over the luxurious white mane he wore in a short ponytail. He reminded me of Karl Lagerfeld…without the fashion sense. Seymour favored jeans, old rock band T-shirts under flannel shirts, and Doc Martens.

“Is it something you want to bring me in on?” I asked, a flutter of anticipation tickling the inner side of my navel. One of the reasons young advertising professionals scratched and clawed for a chance to work at Drummond was Seymour’s rep for promoting talent sooner rather than later.

He cocked his head and regarded me with brilliant blue eyes.

I heeded Master Po’s advice and endured Seymour’s contemplation without giving in to the urge to fidget.

“Are you familiar with Care For All?”

“Never heard of it.” I hated to admit I was unfamiliar with it, but Seymour had zero patience for suck-ups.

“Care for All is a private nonprofit.” Seymour leaned on one elbow in the massive executive chair that dwarfed his short, stringy build, reaching to tap his keyboard. “It’s an international humanitarian organization that funds healthcare initiatives in impoverished communities. Their goal is to ‘establish permanent community resources.’” His brows rose as he quoted the corporate-ese.

“Hell, yeah, it’s noble.” His casual tone belied the ferocity of his words. “The problem is that funding has dropped off, and their budget is shrinking. They’ve relied on grants and federal subsidies for the past two decades, but that isn’t working anymore.”

The buzz of anticipation kicked up a notch, sending goosebumps over every inch of my skin.

“They want to reach out to the public for contributions. Last night, I chatted with Alistair Deacons, who’s on the board of directors.”

I sat up, my brain already riffling through ideas. I’d been at Drummond long enough to have learned the secret to its success.

“What’s the story?” I couldn’t hide my excitement. Drummond didn’t create ad campaigns; it created story campaigns. Storytelling marketing relied on a narrative that created a visceral response, prompting consumers to take action. Seymour was a master—probably the master—of the art form.

“You tell me.” A smug look of satisfaction creased Seymour’s face.

“Me?” The word squeaked out as surprise, and delight hit me with a one-two punch.

“If you’re up for it.” He leaned forward, all business now. “I need someone who can give me a hundred percent for at least a month. Maybe longer.”

“Not a problem.” The only commitment on my horizon was the dreaded gender reveal party.

“No. I mean one hundred percent, twenty-four-seven.” His fuzzy caterpillar brows kissed over the bridge of his nose. “If you take this assignment, you’ll be spending two weeks on a tropical island in the middle of nowhere.”